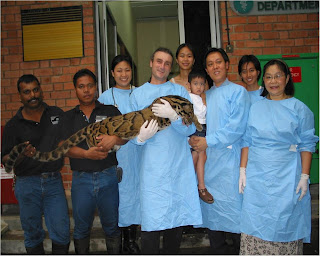 When six-year old female clouded leopard at the Night Safari, Yen Bai, broke her tooth while biting on a piece of log, she was not able to eat for a few days because of the pain. Yen Bai’s zookeeper contacted the zoo veterinarian for help, who in turn contacted a team of dental specialists to lend a hand.

Dr. Neo Tee Khin, Consultant Prosthodontist at Specialist Dental Group, was called in to make a crown for Yen Bai, after she had undergone root canal treatment by another dental specialist. On the day of the procedure, the leopard was sedated and general anesthesia was administered. Dr. Neo made an impression of Yen Bai’s mouth with an improvised dental tray and fitted the tooth with a temporary crown.

It was an interesting situation as the only reference or guide that he had in making the crown was the dry skull of another leopard. The shape of the crown that was fabricated was unlike the crowns that he was accustomed to working on in his regular practice as leopard teeth are very different anatomically from human teeth.

Further, Dr. Neo also had to research the diet and chewing pattern of the leopard in order to be familiar with its anatomy and bite. As the tooth that needed to be crowned was the primary tooth used to capture its prey and for tearing meat, the mechanical demand on the tooth was many times that of human teeth. The canine tooth in a leopard is easily more than 6cm long compared with human teeth which rarely exceed 3cm in length. The amount of gold used in fabricating the crown was also significantly more – about 25g versus 2-3g for a human tooth.

According to Dr Neo, his greatest satisfaction, after the procedure was done, was to see Yen Bai being able to eat properly again.